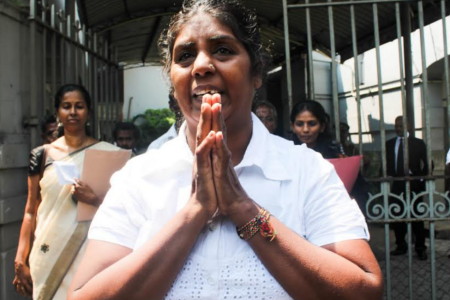 Balendran Jeyakumari (B/4002/08/2014) was arrested along with her 13 year old daughter Balendran Vibushika in Kilinochchi, on March 13, 2014 on suspicion of harbouring a suspect in a shooting. She was detained by the Terrorist Investigation Department (TID) at the Boosa Detention Centre. Her daughter was later turned over to the Department of Probation and Child Care Services and was in the care of Mahadevan Children’s Home, Kilinochchi.

Balendran Jeyakumari is a widow and is a mother of three sons and a daughter. Vibushika is the youngest and the only girl in the family. She had lost two of her sons to the war and her third teenage son was conscripted by the LTTE during the final stages of the war and was reported to have surrendered to the military. He then disappeared. She was an active member of the movement— Families of the Disappeared.

Jeyakumari’s arrest took place at a time when the UN Human Rights Council in Geneva was considering a resolution calling for an international investigation into alleged war crimes in Sri Lanka. Her case in the Magistrate’s Court Colombo B/4002/08/2014 is also hear by CHRD under another donor. She was released on bail on March 10. 2015.

The lawyers appearing on behalf Jeyakumari met with the acting Attorney General on 26 th February 2015 at the AG's department to discuss matters regarding Jeyakumari and her status and received approval to file bail application. Accordingly bail application was filed at the Colombo Magistrate's Court on 27 th February by her lawyers.

During the case was called 07 times at the Colombo Magistrate Court. CHRD provided litigant support and carried out a number prison visits observe her condition and ensure her protection. With the support of the Legal Aid Commission, CHRD made it possible for Vibushika Balendran to visit her mother in prison.

It is important to note that Balendran Jeyakumari now lives with her daughter in Kilinochchi. However, her cases are continuing in two courts.