Two mothers protesting in Vavuniya called for inquiries by the TID 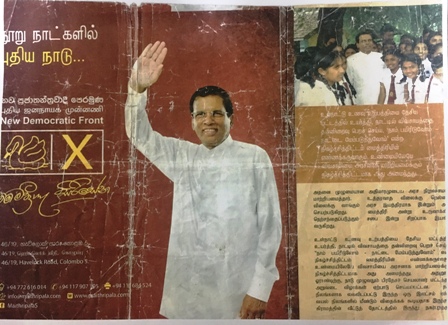 Two mothers who have been part of the ongoing protests held by the families of the disappeared in Vavuniya have been called by the Terrorist Investigations Department (TID) for inquiry on May 15th and 16th 2018 respectively.

The children of the two mothers disappeared during the last phase of war while people moved into military controlled areas.

During the presidential election campaign in 2015 there was a leaflet published and circulated by the Sri Lanka Freedom Party where the cover page carried an image of the now President Maithiripala Sirisena surrounded by school children.

The mothers identified two children as their own and this photo was taken in the period between 2010 and 2014 when President Maithiripala Sirisena was the health minister. In January 2016 TID had informed the two mothers that they will look for their children, when the mothers had reported this to the police. However, there was no response from the department until now. When the two mothers were called for inquiry on May 15th and 16th 2018, the TID had stated that when the photo was taken with the president the children may have been there but not anymore.

This statement by the TID only goes on to prove that the government lacks political will and commitment to address issues of justice and accountability especially when it comes to the disappeared.

Further, it must be highlighted that in the recent months CHRD has observed local activists, victims, rehabilitated carders, or released PTA detainees have been called by the TID for inquiry in Colombo. The victim communities are usually struggling to make ends meet with their poor financial conditions and live way below the poverty line, despite the fact that they continue to campaign for the justice for the gross human rights abuses that took place during the war to them and their loved ones.

They could be easily questioned in their respective districts; but by calling them to Colombo for inquiry these State institutions not only instill fear amongst these victims but also they are in need of financial support for travel, meals and accommodation. Further, it affects their day to day efforts to support their families as well as their activism.