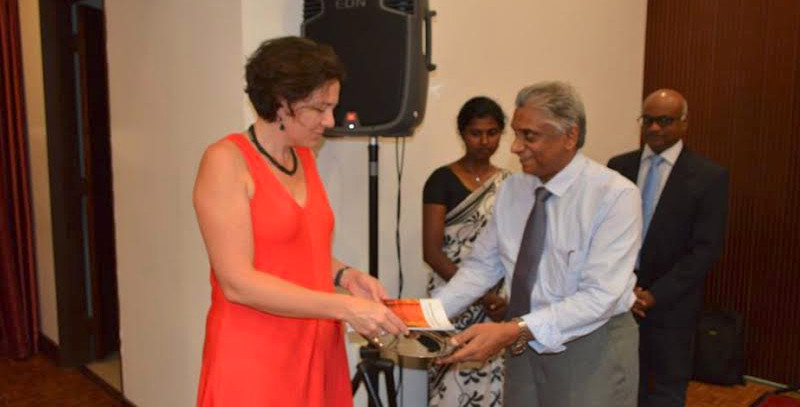 The launch of the research report on Enforced Disappearance in Sri Lanka: Lessons from CHRD Advocacy was held on 4th September 2015, at the Bandaranaike Memorial International Conference Hall (BMICH) in Colombo.

CHRD’s report reflects on concerns from its own advocacy and offers constructive recommendations to promote truth and justice for families of the disappeared. Addressing enforced disappearances is critical in dealing with the past.

As the LLRC acknowledged, families have a right to know the whereabouts of their loved ones and know the truth about what happened. The LLRC further acknowledged the Sri Lankan government’s obligation ‘to ensure that these allegations are properly investigated into and perpetrators brought to justice’.

Foreign Minister Mangala Samaraweera committed to establishing a new mechanism to investigate disappearances in coordination with the ICRC. However, in Sri Lanka, where there have been nearly a dozen flawed commissions on disappearances since 1991, there must be assurance that any new mechanism will be credible. CHRD’s new report adds to the current discussions by exploring the roadblocks to truth and justice in CHRD’s own advocacy that must be considered in designing a credible mechanism.

In short, CHRD has expressed several concerns with the Paranagama Commission, including: witness harassment, ad hoc expansions of the mandate in time period (now covering 1983-2009) and substantive scope (now covering alleged war crimes gross translation errors, lack of gender sensitivity or contextual knowledge, and other technical problems. The Paranagama Commission has failed to address these concerns, and families of the disappeared have begun to boycott proceedings in large numbers.

In each of CHRD’s habeas corpus cases, State Respondents file Objections that fail to respond to admissible eyewitness or documentary evidence indicating State responsibility. In nearly every case, families face harassment and threats because of their litigation. Of CHRD’s 21 pending cases, 14 relate to disappearances on or around May 18, 2009, following surrender to the 58th Division of the Sri Lankan Army at the Wattuvahal Army Camp at Mullaitivu, and 7 relate to other disappearances by the Army, Navy, and TID.

The launch commenced with Dr. Mahesan Ganesan, Chairman giving an introduction to the publication. Thereafter, K.S. Ratnavale, Director spoke on roadblocks to justice and accountability in terms of habeas corpus filed on behalf of surrendees amongst the disappeared while Rev. V. Yogeswaran, Chairperson, CPPHR touched on the concerns raised with the Presidential Commission on Missing Persons. Attorneys- at-law Ermiza Tegal and Ranitha Gnanarajah spoke of their experience, challenges and way forward on their work on the Matale mass grave and Mannar mass grave, respectively. Voices of missing persons too was reflected by family members Vathana Sunthararaj Sandhya Ekneligoda, Kanthasamy Ponnammah, and Anton Joseph Sithamparam.

Mangaleswary Shanker, Chief Executive Officer, ended the launch by outlining recommendations to the State and the international community to ensure a credible mechanism to investigate disappearances and rebuild trust with families of the disappeared.

First copies of the Report was handed over to the dignitaries such as UN Resident Coordinator, Mr. Subinay Nandy, Deputy High Commissioner of the United Kingdomto Sri Lanka Laura Davies, Chief of Political Section of the US Embassy, Kelly Billingsley as well as the political officers of the EU Commission and Indian Embassy. Chairman of the Presidential Commission to Inquire into Complaints of Missing Persons, Justice Maxwell Paranagama also received the first copy of the report.