Review and repeal of PTA 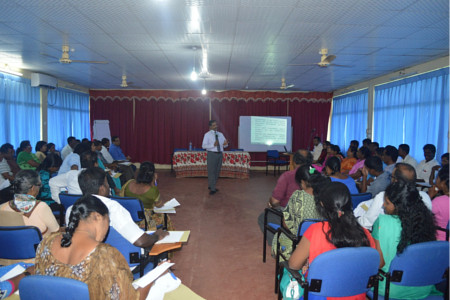 Two public meetings were held in in the Northern and Eastern province in the view of the recent developments that measures were being taken by the Government to replace Prevention of Terrorism Act (PTA) with Counter Terrorism Bill which many consider as far more draconian than the current Act. Therefore, held two combined meetings in the two provinces. The meetings were held in November and the first meeting was held on the 12th in the Kilinochchi district (Cooperative Society Hall) combining all five districts in the Northern province, while the second meeting was held in the Batticaloa district (Mianni Retreat Centre) on the 19th combining all three districts in the Eastern province.

The resource person commenced his lectures explaining the ill effects of the PTA. The application of the PTA has negatively affected the application of ordinary law, including the reticence of the judiciary towards protecting civil liberties, permitting abuse and impunity of the police, military powers interfering with individual rights, and eroded public transparency and good governance.

As for the information on measures being taken to repeal the PTA with a proposed Counter Terrorism bill which is deemed as even more severe, the resource person emphasized that many have noted that the new piece of law, if adopted, could give the government an opportunity to crush any dissent and any opposition by labelling it as ‘terrorism’

The resource person highlighted provisions which violate international human rights standards in the above four Acts, adding that such provisions have been considered while drafting the Counter Terrorism bill in Sri Lanka and that’s one of the reasons that many deem it as worse than the PTA. However, he stated that still the Bill is a work in progress and constantly changes and corrections are being made to make it more presentable.

During discussion with the participants in Kilinochchi, it was observed that many had various views pertaining to the PTA or CTA. Some stated that PTA should exist with amendments as well as with a different name, while others stated that the law should not exist at all and must be abolished.

The group which felt that the government will anyway go ahead with PTA or CTA and therefore, the advocacy campaign should focus on amending the law in a way without discriminating minorities and reducing powers of the security forces. They also added that the term ‘terrorism’ should be taken out in order that it would be feared less.

However, the majority of the participants were against having the Act, they pointed out the Northern Province Chief Minister, Justice C.V. Wigneswaran’s statement on PTA where he said that the existence of such an Act was not necessary and perpetrators who have threatened national security can be dealt with under the normal law. They further added that the people of the North fully oppose the PTA and that minorities cannot make this change and the message has to be carried across to the people of the South.

CHRD’s objective to hold such meetings was to raise awareness of the new counter terrorism bill and gather support and momentum in its long term campaign to repeal PTA and release political prisoners. With the recommendations provided by the affected communities themselves CHRD intended to widen the campaign to the national level and present these recommendations to the parliamentarians, political parties and the civil society in the South as well as the international community including UN and EU etc.,

Bearing in mind the observations of the meeting held in Kilinochchi, CHRD carefully outlined the agenda for the PTA/CTA meeting to be held in the Eastern province.

The programme was based on the following three questions: Did this meeting enable you to make an informed choice to support CHRD’s campaign to repeal PTA? If not, what steps must be taken support CHRD’s initiative to draw support for the campaign and, Was the resource person and the facilitator were able to communicate this message clearly to the audience?